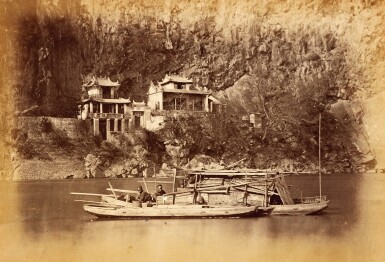 THE RAREST OF THOMSON'S PHOTOBOOKS ON CHINA, OF WHICH ONLY A FEW COPIES ARE KNOWN. WorldCat lists 3 institutional copies, and the last copy we have traced sold at auction was 38 years ago at Sotheby's Belgravia (17 June 1981, lot 194, £1500).

This publication was the result of Thomson's sailing voyage in the summer of 1870 up the North Pearl River from Canton (Guangzhou), and was reviewed in the Hongkong Daily Press on 31st October 1870: 'Mr Thomson has just published a volume of admirable photographs of scenes on the North River, entered about 40 miles above Canton through the Fatshan creek. The views, which are beautifully executed, are accompanied by a short description of the places which they respectively represent ... Better praise cannot be given to them than stating that they are fully up to the standard of the previous views which have gained Mr Thomson the high reputation he enjoys.' (quoted in Bennett).

'Views on the North River would have been expensive to produce and the print run was probably small ... Later in 1870 Thomson was in Foochow (Fuzhou) to embark on a trip along the River Min where he produced some of his most powerful landscape work' (Bennett).

The 14 photographs are titled:

1. Road to the village of Wong Tong

10. Looking north from the Pau-lo-hang Temple

13. View from the Kwan Yin Cave